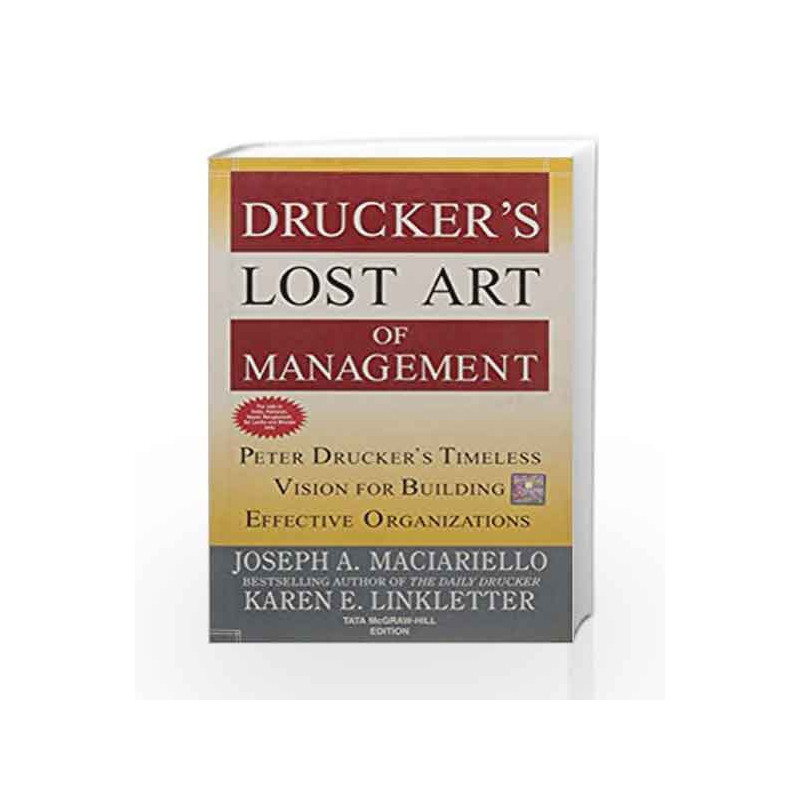 For Drucker, management was a moral force, not merely a tool at the service of the amoral market . . ."Maciariello and Linkletter provide a very thoughtful and challenging journey in understanding Drucker's profound insights into the meaning of management as a liberal art." C. William Pollard, Chairman Emeritus, The ServiceMaster Company"Linkletter and Maciariello have done a masterful job in bringing into focus the connections between Drucker's visions of management as a liberal art, of leadership dominated by integrity, high moral values, a focus on developing people, an emphasis on performance and results, and on balancing stability and continuity vs. the discontinuities created by change." Kenneth G. Wilson, Nobel Laureate in Physics 1982, 20-year disciple of Drucker's writings"Maciariello and Linkletter provide a must-read for a new class of managers and academics who see beyond the bottom line." David W. Miller, Ph.D., Director Princeton Faith & Work Initiative and Associate Research Scholar, Princeton University, and President, The Avodah InstituteAbout the Book:While corporate malfeasance was once considered the exception, the American public is increasingly viewing unethical, immoral, and even criminal business behavior as the norm. According to the authors of Drucker's Lost Art of Management, there is some truth behind this new perception. Business management has lost its bearings, and the authors look to Peter Drucker s vision of management as a liberal art to steer business back on course.Recognized as the world's leading Drucker scholar, Joseph Maciariello, along with fellow Drucker scholar Karen Linkletter, provides a blueprint for making corporate American management more functional and redeeming its reputation. Throughout his career, Peter Drucker made clear connections between the liberal arts and effective management, but he passed away before providing a detailed exposition of his ideas. Maciariello and Linkletter integrate their Drucker expertise in management and the liberal arts to finally define management as a liberal art and fulfill Drucker's vision.In Drucker's Lost Art of Management, Maciariello and Linkletter examine Drucker's contention that managers must concern themselves with the foundational concepts of political science, history, economic theory, and other liberal arts, such as:Societal values and standardsThe use and abuse of powerIndividual character developmentInnovation and technologyThe nature of good and evilThe role managers play in a healthy societyThe authors create a new philosophy of management based on the principles leaders throughout history have relied on to be effective both individually and as custodians of civilized society and healthy economies.Our future executives, professionals, managers, and entrepreneurs are on track to learning (and perpetuating) the idea that only the bottom line matters in business--a concept that benefits no one in the end. It's up to us to instill the ageless verities that make for good management, good society, and good business results.A passionate call for radical change in today's management practices, Drucker's Lost Art of Management provides the ideas, concepts, and practical advice to make that change happen before it's too late.